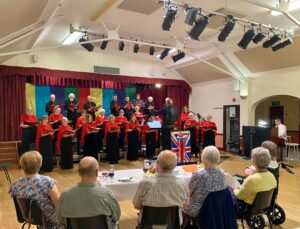 Steventon Choral Society’s first face-to-face concert in Steventon Village Hall since December 2019 began with four arrangements sung by the choir of songs from Richard Rodgers and Oscar Hammerstein II musicals: Oklahoma and Oh What A Beautiful Mornin from the musical Olkahamoa (1943), June is Bustin’ Out All Over from Carousel (1945) and Some Enchanted Evening from South Pacific (1949).  Next came a duet by Fran Brightman and Howard Feather singing Secret Love from the film Calamity Jane (1953) before the choir returned to sing two songs on a ‘lion’ theme: Can You Feel the Love Tonight from the Disney film The Lion King by Elton John and Tim Rice (1994) and The Lion Sleeps Tonight, written by Solomon Linda in 1939 under the title Mbube (Zulu for lion) and arranged by George Weiss in 1961. The choir’s youngest member, Tiri Jordan, then sang Somewhere Over the Rainbow by Harold Arlen and Yip Hartburg from the 1939 film The Wizard of Oz. This solo was followed by a trio of Helen Pearce, Debbie West and Fran Brightman singing a Roger Emerson arrangement by My Land by Brendan Graham, Alana Graham and Rolf Lovland (2014) and Helen Pearce singing I Could Have Danced All Night from the musical, My Fair Lady, by Alan Jay Lerner and Federick Loewe (1964). The first half closed with the choir singing an arrangement of a selection of songs from the musical Oliver by Lionel Bart (1960). 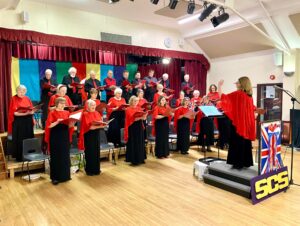 The second half of the concert began with the choir singing arrangements of Climb Every Mountain and Edelweiss from one of the 20th century’s most popular films, The Sound of Music (1965), another Rodgers and Hammerstein hit. Then it was time to recognise Andrew Lloyd-Webber’s contribution to successful musicals during the last 70 years with an arrangement of Love Changes Everything from Aspects of Love, first produced in the West End in 1989. The next choir item came from the same year with an arrangement of Let the River Run, written by Carly Simon for the film Working Girl.  Then came a series of three solos:

The main piece of the second half featured the choir singing the 1969 abridged version of Andrew Lloyd Webber and Tim Rice’s Joseph and the Amazing Technicolour Dreamcoat written originally for school and youth clubs.  During the performance at the second concert, there was a surprise for the musical director Terry Pearce  – part of (secret) celebrations marking his 40 years of conducting Steventon Choral Society – when his stepson Tom Hartley appeared to sing the part of Pharoah in the Song of The King, reprising a role he’d taken when a choir member. 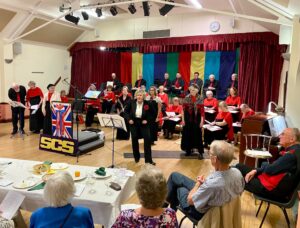 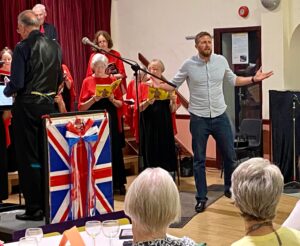 Tom Hartley sings the Song of the King

In an addition to the programme, musical director Terry Pearce brought forward one of the choir’s founder members Jack Jarvis to sing the verse and first rendition of the chorus of Good luck Good Health God Bless You, a song first published in the USA in  1916 but made famous in the early 1950s by singers such as Connie Francis and Steve Conway.

The concert ended with a rousing rendition, in which the audience joined in, of Sweet Caroline by Neil Diamond, first released in 1969 and sung widely at the Platinum Jubilee celebrations. 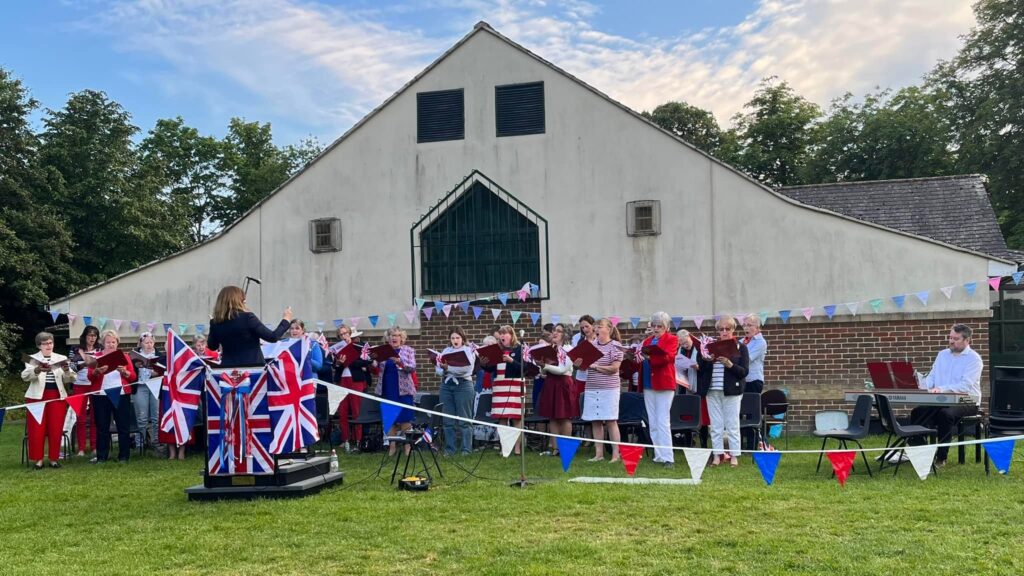 Terry Pearce addresses the audience during the Jubilee Concert at Steventon

After the concert at Steventon, a small group from the choir made its way up to the Trig Point on Steventon Hill for the lighting of the beacon there. Before the beacon was lit the group reprised the singing of the Jubilee beacon song, ‘A Life Lived with Grace’. 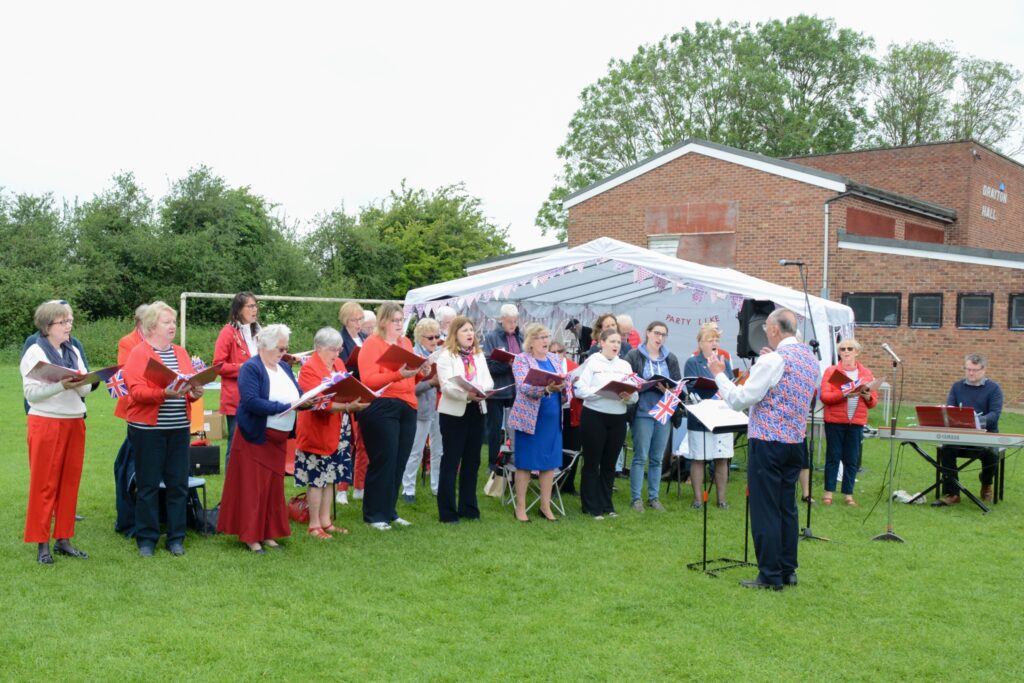 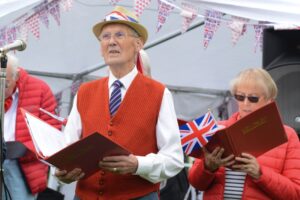 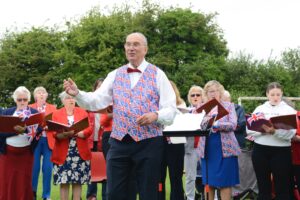 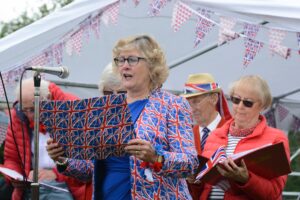 In aid of the Ukraine Humanitarian Appeal run by ActionAid.
Over £1450 raised so far. You can still donate via the SCS for Ukraine page on JustGiving.

For the second half, the lights in the church were dimmed and the choir wore ‘Support Ukbraine’ brooches on their jackets.

The concert ended with a message of peace from Revd Phil Sutton.

This free concert via Zoom, watched by some 50-60 people, featured: 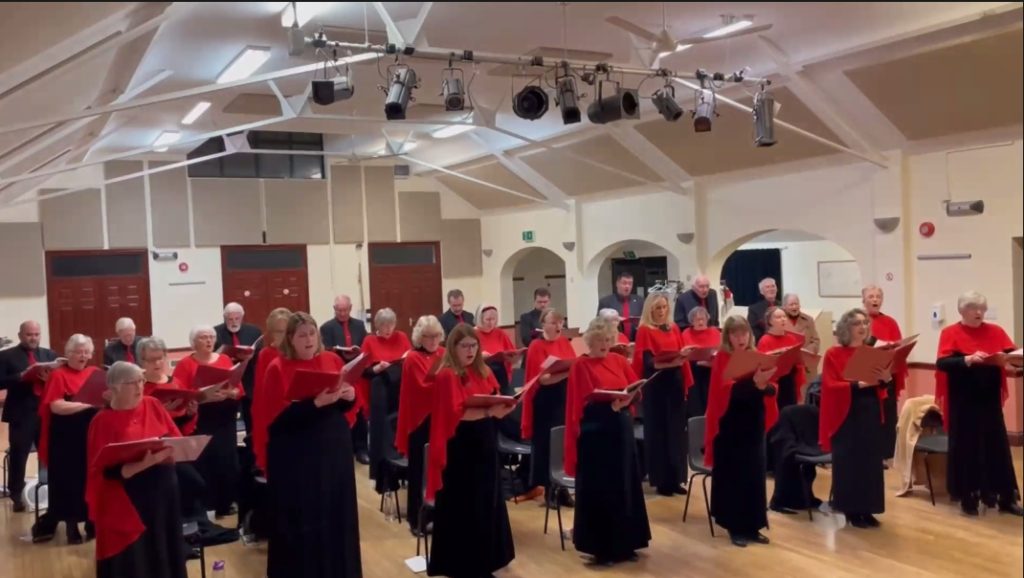 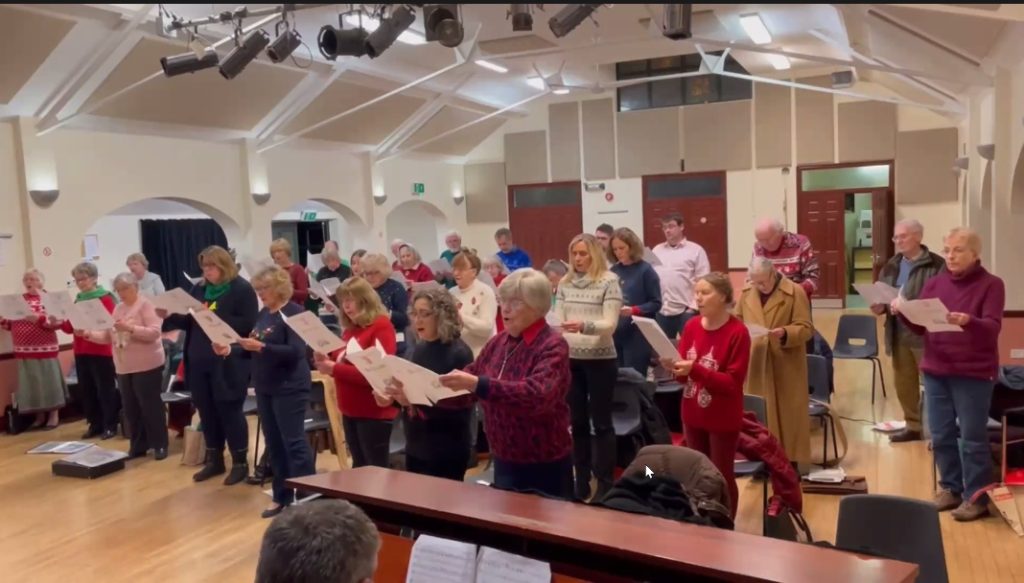 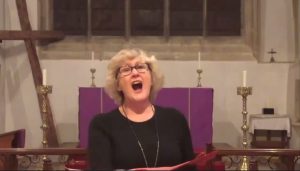 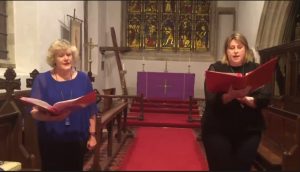 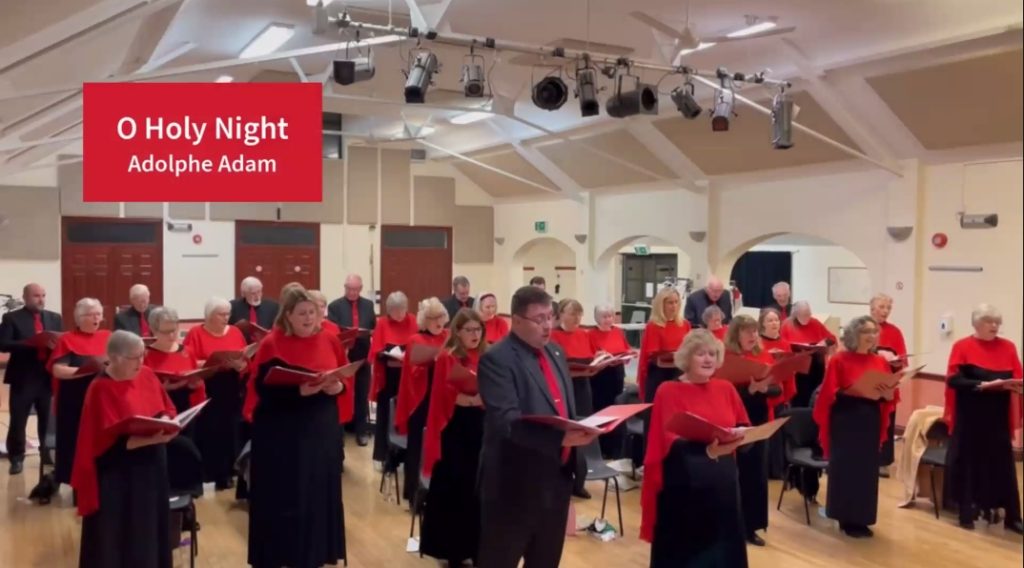 Then it was Helen’s turn to introduce a group of four pieces: 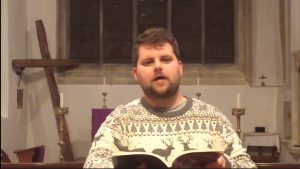 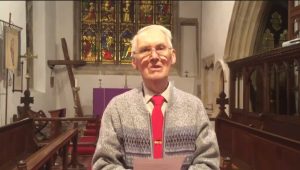 As the concert moved to its close, Howard introduced two items: 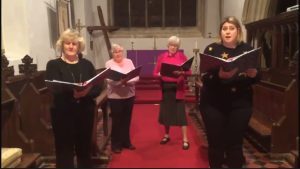 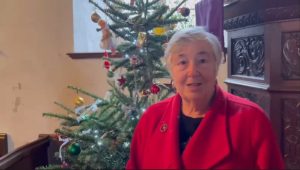 Thanks from SCS chairman, Caroline Miller

Terry ended the concert by thanking the technical team who’d made the virtual concert possible:

Terry also thanked the Vicar of Steventon, Rev. Phil Sutton, for letting us use the parish church for recordings.

The concert ended with the choir singing Terry’s arrangement of the Johnny Mathis hit, When A Child Is Born, accompanied by Terry on the guitar and with Debbie conducting. 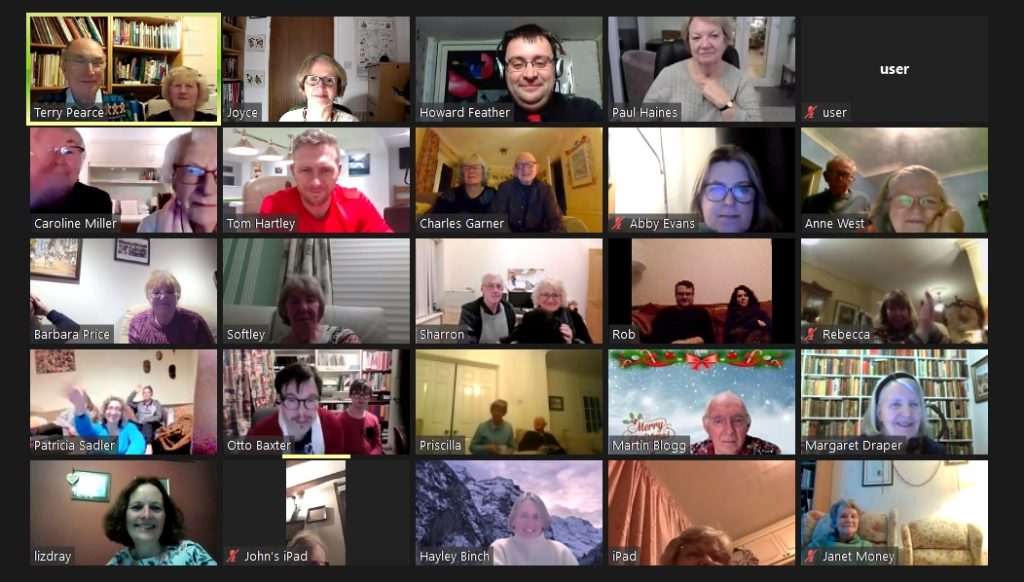 The choir, wrapped up warm, entertained an audience of some 50-60 people with a selection of well-known Christmas carols and songs.

The Nativity trailer from outside Steventon Church provided a Christmasy feel to the event. 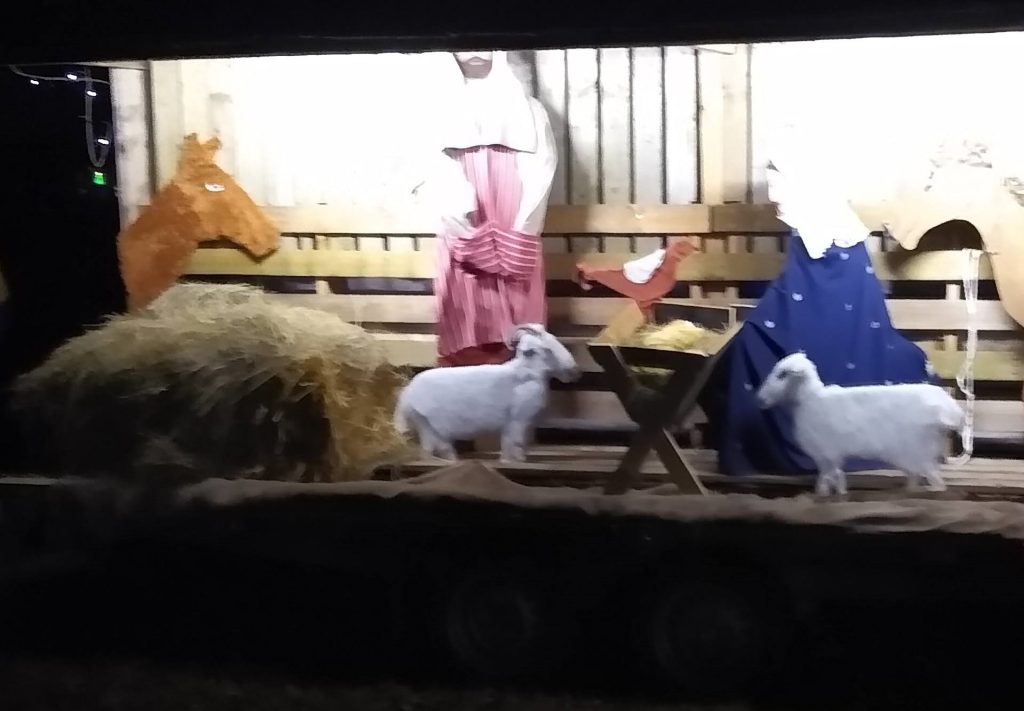