The Saturday concert was given in aid of Hearing Dogs for Deaf People – a UK charity that trains dogs to alert deaf people to sounds, as well as helping them to leave loneliness behind. Choir member, Sharron Jenkinson, told the audience and choir about the charity’s work. She also introduced everyone to Riley, the 11-week old hearing dog puppy she and husband George have just started training and the slightly older Troy, currently being trained by another choir member, Jane Sutton and her husband Phil. The concert raised £570 for the charity. 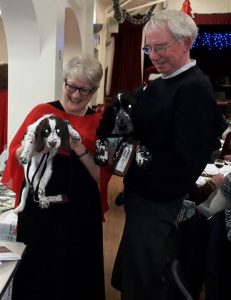 Riley and Troy, with their trainers Sharron and Phil, at the concert

The concert opened with Martin Shaw’s Fanfare: Gloria in Excelsis Deo in a setting for sopranos and altos by Maurice Jacobsen and the full choir singing two traditional Christmas pieces – Christmas is Coming and Deck the Hall (the latter in an arrangement by Sir David Willcocks) and the popular Christmas song Little Donkey by Eric Boswell. The audience was then invited to join in to sing two well-known carols, While Shepherds Watched Their Flocks by Night and O Little Town of Bethlehem. These were followed by first Howard Feather (tenor) singing the Bach/Gounod setting of Ave Maria and then by the full choir singing a modern carol The Christ-child by Will Todd, an arrangement by John Rutter of the 14th century carol Quem Pastores Laudavere sung (first verse: Rebecca Joisce), and – in a tribute in the choir’s 60th anniversary year – a carol, The Angel Gabriel, written by its first musical director, Geoffrey Harding. 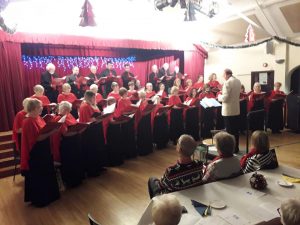 In complete contrast, the next piece was a poem on the theme of Christmas, Goodwill to Men – Give Us Your Money, by Pam Ayres read by Vivienne Dann. After this comic interlude, it was back to more serious music with the choir singing The Holy Child, a setting by Easthope Martin of the words of Away in a Manager (second verse: Rebecca Joisce). The first half of the concert concluded with two Christmas songs. The first was a duet by Abby Evans and Fran Brightman of Last Christmas, a piece first recorded by Bing Crosby and David Bowie, with the former singing Little Drummer Boy and the latter singing Peace on Earth written specially or the recording. The second, sung by the full choir, was Silver Bells by Jay Livingston and Ray Evans from the film The Lemon Drop Kid. 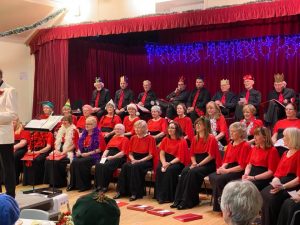 The choir waits to sing The Twelve Days of Christmas

Audience participation was required in the impromptu rendering – with actions and props – by the choir of The Twelve Days of Christmas which began the second half of the concert. Then came two more well-known Christmas songs, Santa Baby and Sleigh Ride, both sung by a trio of Helen Pearce, Abby Evans and Fran Brightman. 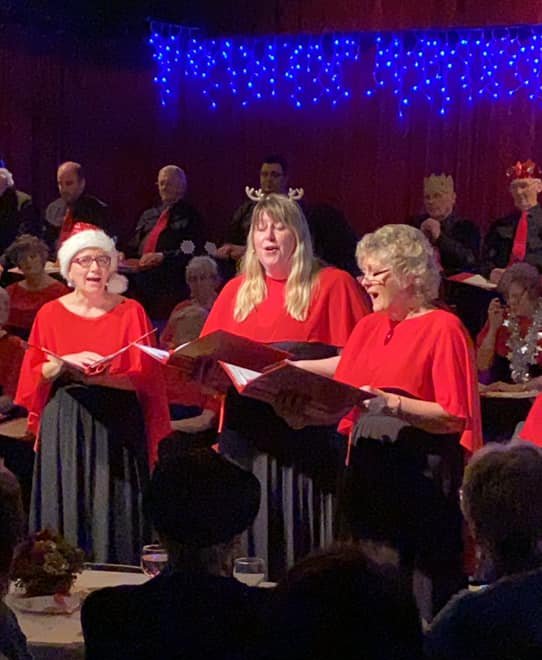 The audience was then invited to join in again with two more carols – Once in Royal David’s City and O Come all ye Faithful – before another favourite carol, O Holy Night, sung by the full choir (soloists: Helen Pearce and Howard Feather). This was followed by a quartet (Howard Feather, Luke Le Maitre, Phil Brazier and Terry Pearce singing Mary’s Boy Child – a Christmas song from 1956 by Jester Hairston. 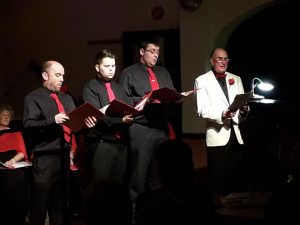 The full choir continued the second half with a performance of Christmas Day, Gustav Holst’s choral fantasy on old carols (soloists: Rebecca Joisce, Phil Brazier, Helen Pearce, Luke Le Maitre). Then we heard two songs written in the 1950s: Helen Pearce sang I Saw Mommy Kissing Santa Claus by Tommie Connor and Luke Le Maitre sang I’ll Walk with God from the film The Student Prince. Next was the final audience carol of the evening, Hark the Herald Angels Sing. Not a Christmas song but a chance to hear again the choir’s male soloists came when Howard Feather, Luke Le Maitre and Phil Brazier sang Danny Boy, a ballad written in Somerset in 1913 by English lyricist Frederic Weatherly set to a traditional Irish melody sent to him by his Irish sister-in-law. The full choir returned to sing the final three pieces of the concert: The Colours of Christmas by John Rutter, Harold Darke’s setting of In the Bleak Midwinter and Irving Berlin’s famous song, White Christmas. 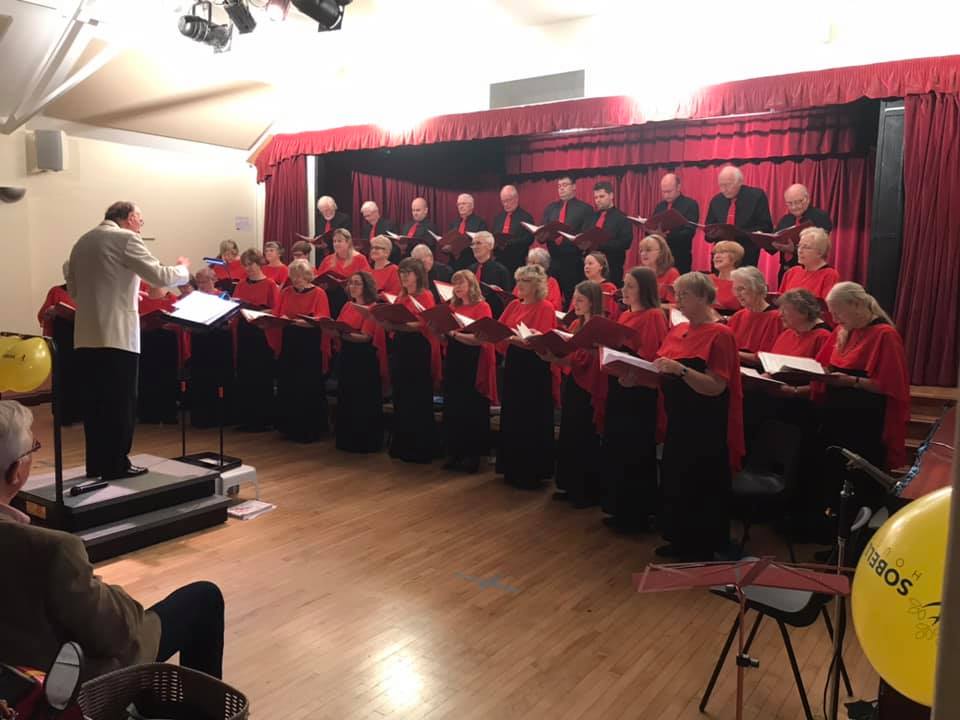 The first half featured a selection of well-known classics. It opened with the choir singing John Rutter’s For The Beauty of the Earth, Purcell’s Rejoice in the Lord Always (trio Fran Brightman, Luke Le Maitre, Phil Brazier), Flow Gently Sweet Afton (the setting by Jonathan Spillman of the 1791 poem by Robert Burns about the Afton Water in Ayrshire, Scotland) and How Lovely Are Thy Dwellings from Brahms’ Requiem. A small group (Helen Pearce, Rebecca Joisce, Abby Evans, Fran Brightman, Luke Le Maitre, Howard Feather, Phil Brazier, Terry Pearce) then sang an arrangement for mixed voices of the Canon in D by Pachelbel before the full choir returned to sing (in French) the Cantique De Jean Racine by Gabriel Fauré and All In The April Evening by Hugh Roberton, interspersed with a solo by Luke Le Maitre, the song A Bit Of Earth from the musical The Secret Garden). The next piece was the Nuns’ Chorus from the operetta Casanova by Strauss sung by a small ladies group (Helen Pearce, Trish Napper, Patricia Sadler, Helen Chomyszyn, Michelle Jochym, Abby Evans, Caroline Miller, Fran Brightman, Vivienne Dann). The first half ended with three pieces sung by the full choir – an arrangement of the traditional Scottish song, An Eriskay Love Lilt, Howard Goodall’ setting of The Lord Is My Shepherd (soloist: Helen Chomyszyn) and The Irish Blessing by Bob Chilcott. 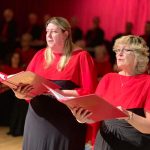 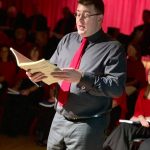 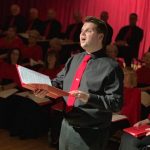 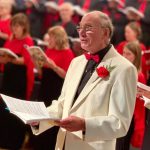 The second half began with the ever popular song, The Lion Sleeps Tonight (English lyrics by George Weiss) and Can You Feel The Love Tonight by Elton John/Tim Rice from the film The Lion King. Helen Pearce then sang Waltz Of My Heart from The Dancing Years by Ivor Novello. This was followed by a selection of Gilbert & Sullivan songs:

Brightly Dawns Our Wedding Day from The Mikado
I Hear The Soft Note from Patience
The Policemen’s Chorus from The Pirates of Penzance
Take A Pair Of Sparkling Eyes from The Gondoliers (solo: Howard Feather)
Strange Adventure from The Yeomen of the Guard
Tit-willow (men) from The Mikado
When Britain Really Ruled the Waves (solo: Terry Pearce) from Iolanthe 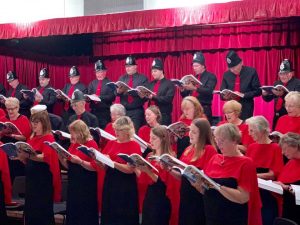 The Policemen’s Chorus from The Pirates of Penzance

The concert drew to a close with two duets: My Heart Will Go On by James Horner sung by Helen Pearce and Abby Evans, and Homeward Bound by Marta Keen sung by Helen Chomyszyn and Michelle Jochym. The full choir performed the final item – a rousing rendition of Seventy-Six Trombones from the musical play The Music Man by Meredith Willson.