The theme of the music for this gala concert was ‘new and old’. For this special concert the choir broke with tradition with the ladies in glamorous evening outfits and the men in dinner jackets.

The first half of the concert began with the choir singing one of six new pieces for SCS, an arrangement of Top of the World by Richard Carpenter/John Bettis which was recorded by the Carpenters in 1972. The next item, an arrangement by Sir Joseph Barnby of Lord Tennyson’s poem, Sweet and Low, was one SCS had sung in 1959 – the year it was founded. This was followed by another piece sung by SCS over the years, Ralph Vaughan Williams’s arrangement of the poem Linden Lea. In contrast the next piece was another new one for SCS – You’ve Got a Friend, written by Carole King in 1971. The choir then took a break while a trio (Helen Pearce, Abby Evans and Fran Brightman) sang an arrangement for three female voices of Alexander’s Ragtime Band by Irving Berlin (including a virtuoso performance on the bazooka) and Fran Brightman sang City of Stars from the 2016 film, La La Land.

The choir returned to sing an arrangement of New York New York, the theme song from the 1977 film of the same name. This was followed by a quartet (Howard Feather, Luke le Maitre, Phil Brazier and Crispin George) singing an arrangement by Hugh S. Roberton of the hymn By Cool Siloam, and the choir singing an arrangement of Fascinating Rhythm, the popular song by George and Ira Gershwin. Next it was the turn of the SCS’s pianist to take the spotlight (for once) with a rousing rendition of Side Saddle, the honky-tonk style tune that was a hit single for Russ Conway in 1959 – a year when he had the most number one hits of any artist. Then came Luke Le Maitre to sing Silent Noon by Vaughan Williams setting of Silent Noon, a poem by Dante Gabriel Rossetti. The first half ended with the choir singing an arrangement of Anything Goes from the 1934 musical by Cole Porter.

During the interval members of the audience enjoyed a piece of 60th anniversary cake made specially for the occasion. 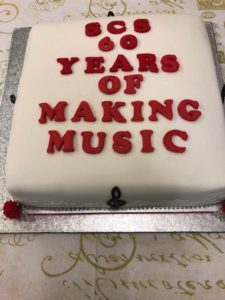 In another throwback to 1959, the second half of the concert opened with a small group in 1950s costume and props performing the song Seven Little Girls Sitting in the Back Seat (kissing and a hugging with Fred), a hit from that year. The seven girls were played by Danielle Beeken, Frances Broadbent, Abby Evans, Sharron Jenkinson, Rebecca Joisce, Trish Napper and Helen Pearce. ‘Ed’ was Edward Dann, the driver was Andy Softley and the driver’s long-suffering wife (sitting in the front seat) was Liz Softley. 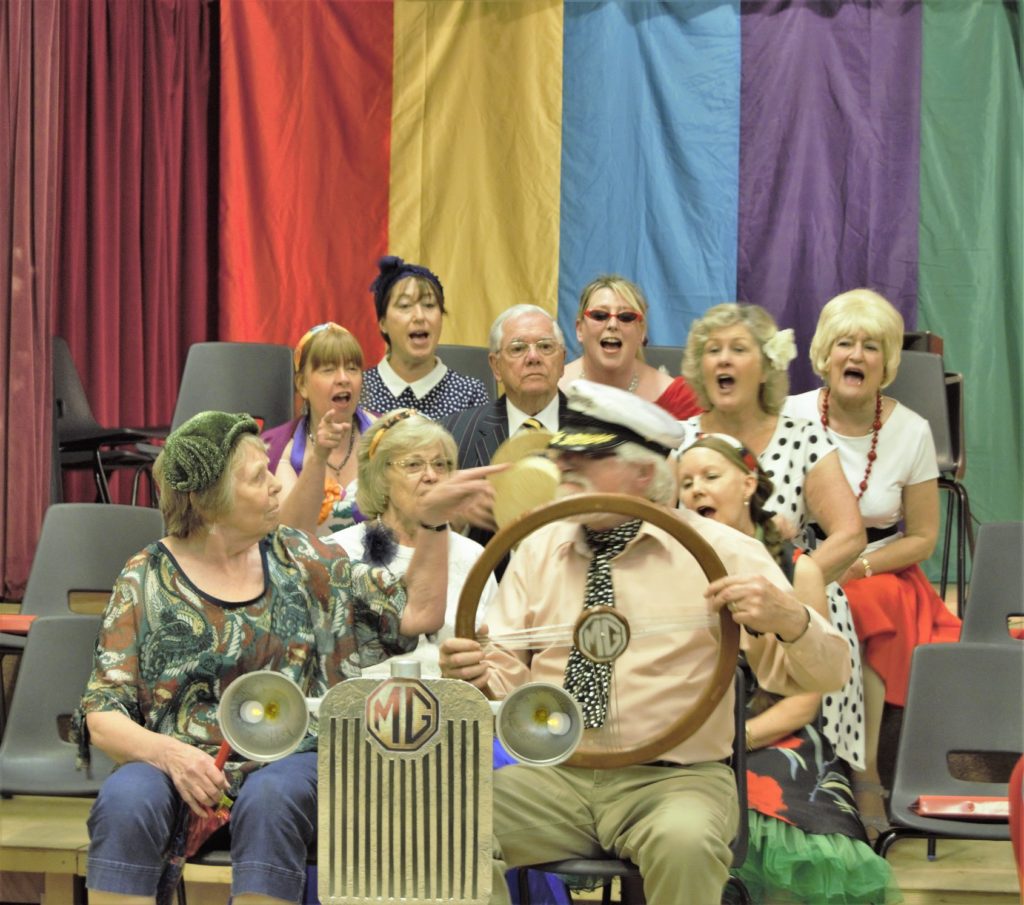 Seven Little Girls Kissing and a Hugging with Fred

The centre piece of the second half was the performance of the ‘pop cantata’ version for schools of Joseph and the Amazing Technicolour Dreamcoat by Tim Rice and Andrew Lloyd Webber. Two other Lloyd Webber pieces followed in a tribute to his influence on music sang by SCS over the past 40 years or so: a duet by Helen Chomyszyn and Michelle Jochym of the poignant ballad God’s Own Country (lyrics by Ben Elton) from the 2001 musical The Beautiful Game; and a solo by Howard Feather of The Music of the Night (lyrics by Charles Hart) from the 1986 musical, The Phantom of the Opera.

Another major influence on the music performed by SCS over the years have been the musicals of Richard Rodgers and Oscar Hammerstein. This was recognised with three pieces from their last work together, The Sound of Music, which opened on Broadway in November 1959. Helen Pearce sang the title song, followed by the choir singing Edelweiss and Climb Ev’ry Mountain.

Next came the final new piece for the evening – an arrangement of Let the River Run, a song by Carly Simon which featured in the 1988 film Working Girl. The concert closed with an old SCS favourite, a rousing rendition of Consider Yourself from the 1960 musical Oliver! by Lionel Bart.

Towards the end of the Saturday concert, the chairman Caroline Miller presented Life Membership Certificates to five long-serving members of the choir: Edna Brewer, Ann Cannon, Joyce Huddleston, Joan Leahy and Sylvia Whitehead. To mark her final concert with the choir, Edna Brewer was also presented with a bouquet of flowers. 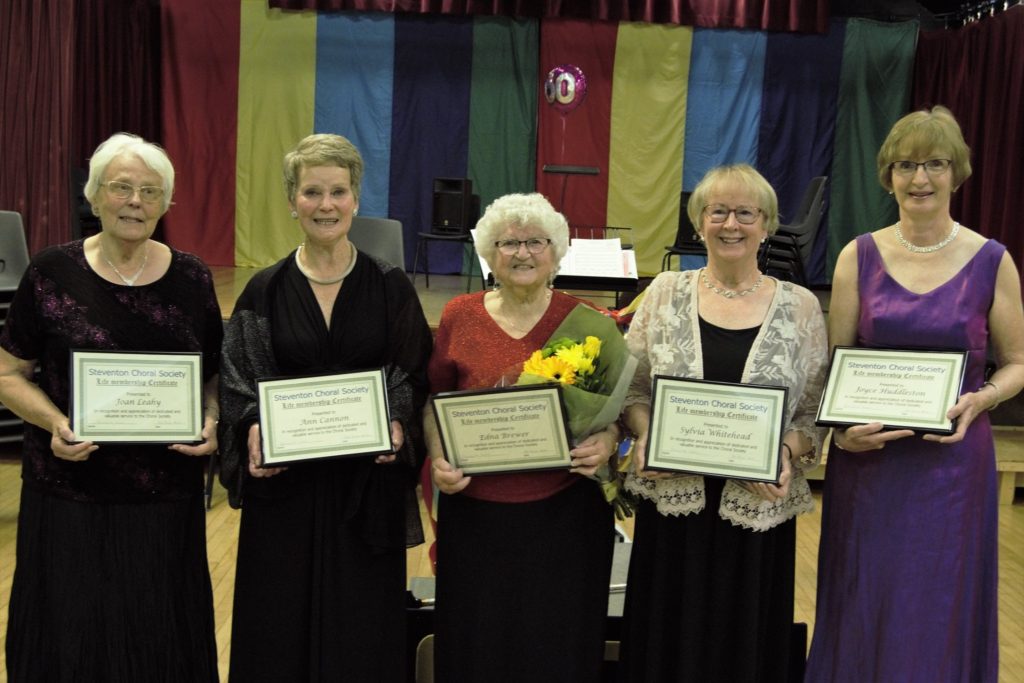 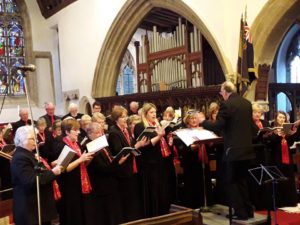 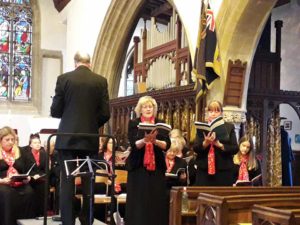 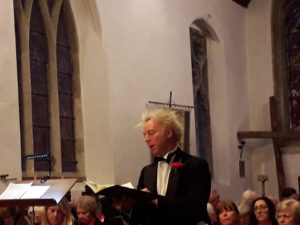 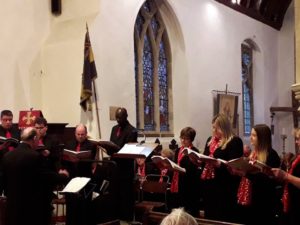 The Saturday concert was given in aid of the Oxfordshire Multiple Sclerosis Therapy Centre at nearby Milton Park.

The concert began with the choir singing Merry, Merry Christmas and Sing Out The News. Then it was the turn of the audience to join in to sing Ding Dong Merrily on High, We Three Kings (with Hugh Hercus, Edward Dann and Jack Jarvis as the kings) and In the Bleak Midwinter. Next was Abby Evans with Hey Mr Snowman – a song recorded by Kim Wilde in 2013, The Russian Carol sung by all the ladies in the choir, and an arrangement of Robbie Williams’ song, Angels, sung by Helen Pearce, Rebecca Joisce, Patricia Sadler, Helen Bell, Michelle Jochym, Danielle Beeken, Abby Evans and Frances Brightman. John Rutter’s Christmas Lullaby sung by the full choir was followed by There is No Rose from Benjamin Britten’s A Ceremony of Carols sung by Michelle Jochym, Helen Bell and Frances Brightman. The choir returned to sing two pieces – a 16th century carol, Gaudete, with soloist Rebecca Joisce who provided a rousing accompaniment on her Irish frame drum, and the Sans Day Carol arranged by John Rutter. Helen Pearce and Abby Evans sang the duet Pie Jesu by Andrew Lloyd-Webber from his Requiem, before a group of ladies from the choir (Helen Pearce, Rebecca Joisce, Patricia Sadler, Trish Napper, Helen Bell, Michelle Jochym, Caroline Miller, Danielle Beeken, Abby Evans, Frances Brightman, Vivienne Dann and Janet Money) sang a four-part arrangement of Silent Night. John Hunt then entertained us with a humorous story about a school nativity play before the first half ended with two audience carols: While Shepherds Watched and Once In Royal David’s City. 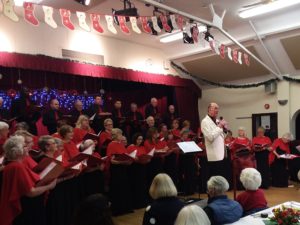 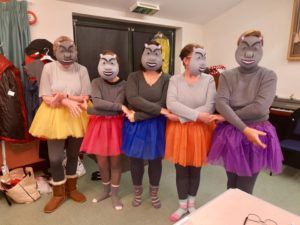 The ‘hippos’ wait to make their entrance 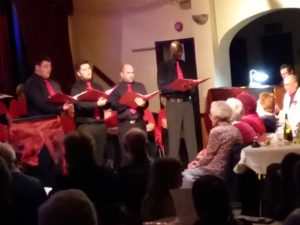 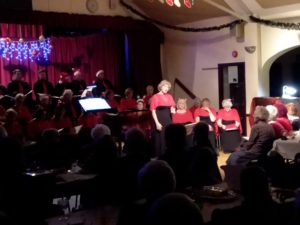 The second half began with Howard Feather singing the 1950s Christmas novelty song, I Want a Hippopotamus for Christmas, and then ‘sleeping’ as a chorus of five dancing hippos appeared – he ‘woke’ up and gave a big hug to the naughty hippo who couldn’t dance and was left behind.Then it was time for an audience carol, O Come All Ye Faithful, and for the choir to sing Blue Christmas, a song made famous by Elvis Presley. A small group (Helen Pearce, Rebecca Joisce, Patricia Sadler, Helen Bell, Michelle Jochym, Danielle Beeken, Abby Evans and Frances Brightman) sang the 12 Days or So of Christmas before the choir sang the rousing Hark The Glad Sound and the lullaby, Hush My Dear. A ladies trio (Helen Pearce, Abby Evans and Frances Brightman) then sang an arrangement of Fascinating Rhythm by George and Ira Gershwin from the 1924 musical Lady Be Good. A highlight of the evening was a men’s quartet (Howard Feather, Luke Le Maitre, Phil Brazier and Crispin George) then sang arrangements of the African-American spiritual, Go Tell It on the Mountain, and Here I Am, Lord, the hymn written by the American composer, Dan Schutte, in 1981. This was followed by the choir singing The Little Road to Bethlehem, Helen Pearce singing Have Yourself A Merry Little Christmas (sung by Judy Garland in the musical Meet Me In St Louis) and the choir singing A Christmas Blessing by Philip Stopford. The concert ended with a stirring performance of Hallelujah Chorus from Handel’s Messiah by the choir.

Concert given in aid of the Hall Redevelopment Project

This festive concert began with the choir singing a traditional carol, List Our Merry Carol, and two popular Christmas songs – Frosty the Snowman and Winter Wonderland. Then it was the turn of the audience to join in to sing Ding Dong Merrily on High, O Come All Ye Faithful and O Little Town of Bethlehem. The first of the evening’s items featuring solos or small groups of singers from within the choir was Abby Evans with Hey Mr Snowman – a song recorded by Kim Wilde in 2013. Abby was then joined by Frances Brightman to sing an arrangement of the song by Howard Blake, Walking In the Air, from the animated film The Snowman. Next was the 12 Days or So of Christmas sung by Helen Pearce, Rebecca Joisce, Patricia Sadler, Helen Bell, Michelle Jochym, Danielle Beeken, Abby Evans and Frances Brightman. The concert continued with choir singing The Three Kings by Peter Cornelius (solo: Howard Feather), Deck the Hall, We Three Kings (with Hugh Hercus, Edward Dann and Jack Jarvis as the kings) and an arrangement by Michael Clawson of the traditional carol The First Noel intertwined with the tune of Pachelbel’s famous Canon in D. The first half of the concert concluded with two more audience carols: Good King Wenceslas and Hark The Herald Angels Sing.

The second half began with the choir singing three pieces: God Bless Us Everyone, Christmas Song (also known as Chestnuts Roasting On An Open Fire) and an arrangement of In the Bleak Midwinter. A small group of mixed voices (Helen Pearce, Trish Napper, Caroline Miller, Vivienne Dann, John Hunt, Edward Dann and Terry Pearce) then performed the humorous song, The Carol Singers, and a trio (Helen Pearce, Abby Evans and Frances Brightman) sang an arrangement of Let It Snow. Helen Pearce remained centre stage to sing Count Your Blessings (instead of sheep), a popular song written by Irving Berlin and used in the 1954 film White Christmas. Next came two more for the audience to join in with: While Shepherds Watched and Once In Royal David’s City before a trio of ladies (Michelle Jochym, Helen Bell and Frances Brightman) sang There is No Rose from Benjamin Britten’s A Ceremony of Carols and the choir sang John Rutter’s arrangement of the Sans Day Carol. A men’s quartet (Howard Feather, Luke Le Maitre, Phil Brazier and Crispin George) then sang arrangements of the African-American spiritual, Go Tell It on the Mountain, and Here I Am, Lord, the hymn written by the American composer, Dan Schutte, in 1981. Three pieces from the choir – Jingle Bell Rock, Sing Out The News and the Hallelujah Chorus from Handel’s Messiah – ended the concert.