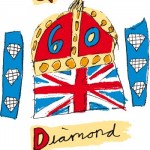 To set the scene the concert began with a short selection of popular songs from the 1950s sung by Rebecca Joisce (soprano), Trish Napper (soprano), Caroline Miller (alto), Jack Jarvis (tenor) and Terry Pearce (bass). The choir then sang Ave Maria in the background while Edward Dann spoke words about the death of George VI on 6th February 1952 and the beginning of the reign of Queen Elizabeth II. The next piece sung by the choir was Roger Quilter’s setting Non Nobis Dominie of a text by Rudyard Kipling written for the Pageant Of Parliament at the Royal Albert Hall in London in July 1934. Accompanying herself on an electronic harp, Rebecca Joisce then sang, Summertime, from George Gershwin’s Porgy and Bess, which was also written in the 1930s but was very popular in the 1950s when it was recorded several times by different artists. Beginning a tour of the different parts of the United Kingdom, the male members of the choir sang an arrangement by Terry Pearce of the Welsh song composed by Joseph Parry. The whole choir then sang the traditional Irish melody, Londonderry Air. Not forgetting the Commonwealth, this was followed by an arrangement by Marie Cowan for four-part choir of Waltzing Matilda – referred to as the unofficial national anthem of Australia. Then it was back to the UK for the traditional Scottish melody, Loch Lomond. The first half of the concert ended with an arrangement by Bill Sanford of Any Dream Will Do from Joseph and the Amazing Technicolor Dreamcoat , by Tim Rice and Andrew Lloyd Webber – one of the most famous musical writers of the last 50 years.

The second half began with a selection of patriotic songs and a marching display by a group of ladies from the choir. Helen Pearce (soprano) then sang A Nightingale Sang in Berkeley Square, written in 1939 by Manning Sherwin and Eric Maschwitz. Love was the theme for the choir’s next two songs – the traditional Hebridean song, An Eriskay Love Lilt, and Love Changes Everything from Aspects of Love by Andrew Lloyd Webber. The choir then sang a medley of songs from another very famous British musical, Oliver! by Lionel Bart, with Helen Pearce leading the singing of Oom-Pah-Pah – sung by Nancy and the crowd at the ‘Three Cripples’ tavern.

Following a short reminder by Edward Dann of the day of the Coronation of Queen Elizabeth II on 2 June 1953, the choir sang Ronald Jamieson’s song, In A Golden Coach, There’s A Heart Of Gold, which was one of the top 12 singles in the UK in 1953. This was followed by a string of patriotic songs – I Was Glad by Sir Hubert Parry, Song of Liberty by Edward Elgar, Land of Hope and Glory by Edward Elgar, Jerusalem (words by William Blake and music by Parry) and Rule Britannia by Thomas Arne (soloist: Helen Pearce). The concert ended with the National Anthem in an arrangement by Sir David Willcocks. 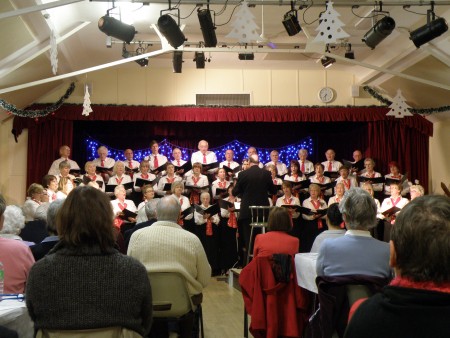 The emphasis for this year’s Christmas concert was on traditional carols.  The concert began with Ding Dong! Merrily on High and Deck The Hall followed by the perennial popular song, White Christmas. Then it was back to carols with List Our Merry Carol (third verse sung by the quartet of Trish Napper, Janet Money, jack Jarvis and Edward Dann) and Golden Slumbers (ladies only). Rebecca Joisce (soprano) followed with an unaccompanied solo, Tomorrow Shall Be My Dancing Day – a traditional folk carol that was the forerunner of the modern hymn Lord Of The Dance. Mo Hunt then recited a humorous poem about one lady’s trials and tribulations following her purchase of a pair of earrings. Following two carols for the audience to join in, the choir returned to sing Away In A Manager (arranged by Terry Pearce), Torches, All Thy Heart This Night Rejoices and O Christmas Tree. Before the next two audience carols, Caroline Miller reminded us of how times have changed with a reading of the advice given in Housekeeping Monthly of 13 May 1955 about how to be a good wife (read it here). Two well-known Christmas songs, Winter Wonderland and Jingle Bells, ended the first half.

The second half began with a ‘festive entertainment’ by a small group of ladies from the choir dressed in costumes inspired by Sister Act: two short pieces from the Sound of Music sung by the nuns were followed by Hosanna Rock and Rock Around the Christmas Tree – one brave man, Andy Softley, joined the troupe as the Christmas tree.  John Hunt’s offering this year was a poem giving a turkey version of The Twelve Days of Christmas (read it here). The choir then sang O Little Town of Bethlehem (Warlord Davies setting), The Little Road to Bethlehem and Hark the Glad Sound (third verse sung by the quartet of Diana Bowder, Caroline Miller, John Hunt and Edward Dann). Lift Tine Eyes sung by a small group (Helen Pearce, Rebecca Joisce, Becky Watts, Diana Bowder, Abby Evans and Frances Brightman) was followed by the chorus He, Watching Over Israel from Mendelssohn’s famous oratorio, Elijah. Terry Pearce (bass) then sang When A Child Is Born accompanying himself on acoustic guitar with Frances Brightman on classical guitar and Rebecca Joisce on a folk music harp with a vocal backing group of Helen Pearce, Becky Watts and Abby Evans. Then it was time for two more audience carols before choir sang In Dulci Jubilo (quartet: Rebecca Joisce, Abby Evans, Jack Jarvis and Tom Hartley), Jingle Bell Rock and God Bless us Everyone. The concert ended with the traditional Christmas Is Coming.

Voices for Hospices is a wave of simultaneous concerts around the globe that takes place on World Hospice and Palliative Care Day every two years to raise funds and awareness for hospice and palliative care.

The concert began with two John Rutter anthems, I Will Sing With the Spirit and Look At The World. Diana Bowder (soprano) then sang Mendelssohn’s popular song, On Wings of Song, which was followed by the choir singing Samuel Liddle ‘s setting of How Lovely Are Thy Dwellings. The traditional Irish folk song, She Moves Through The Fair, was sung by Rebecca Joisce (soprano) followed by a duet, Bless This House, by Helen Pearce (soprano) and Terry Pearce (bass). Terry Pearce then sang, Ralph McTell’s famous Streets of London, accompanying himself on the electric guitar. The choir returned to close the first half with Gabriel Faure’s Cantique de Jean Racine, Panis Angelicus by Cesar Franck and I Don’t Know How To Love Him by Andrew Lloyd Webber and Tim Rice.

The second half began with a setting of Non Nobis Domine by Roger Quilter and Life Thine Eyes from Mendelssohn’s Elijah sung by Helen Pearce, Rebecca Joisce, Diana Bowder, Becky Watts, Frances Brightman and Abby Evans. Helen Pearce (soprano) then returned to sing O Mio Babbino Caro from Puccini’s opera Gianna Schicci. Next the choir sang All in the April Evening by Hugh Roberton before a duet by Helen Pearce and Rebecca Joisce, the popular inspirational song You Raise Me Up.

Jack Jarvis (tenor) then sang Frank Langford’s Hymns My Mother Used To Sing, to set the scene for a series of well-known hymns sung by the choir for the final section of the concert – Guide Me O Though Great Redeemer, Abide With Me, Holy Spirit Truth Divine and Jerusalem. The concert ended with two more anthems by John Rutter God – Be In My head and For The Beauty Of The Earth.